Running for four days between Saturday 13th – Tuesday 16th April, the tournament, supported by School Sport Western Australia, will pit the South West Dolphins, Northern Fusion, North West Reds, Southern Pride and NRL WA Invitational side  against each other to prove once and for all who is the best junior club in the state.

Hosted by the South West Dolphins, Regional Coordinator Ian Prout says team staff have been working tirelessly in the lead-up to the event.

“I’ve got some really good people on the organisation side and they have bent over backwards to make sure people have a great experience this weekend,” Prout said.

“We’re really looking forward to putting on a good show on and off the field this weekend.”

With Under 12 Mixed, Under 14 Schoolgirls and Under 15 Schoolboys all set to compete, Prout says the event provides the next generation of rugby league players with a strong platform to showcase their skills.

“It’s valuable experience,” Prout said. “It’s something our kids in WA don’t get – they don’t get the opportunity to play at this level week-in week-out like the other kids from the Eastern States do.”

“It’s a tournament – they’re vying for a trophy at the end of it and bragging rights for the rest of the year.”

Selectors will be in attendance and will be announcing 2019 WA State Teams (U12 + U15) and Merit Teams (U14) at the conclusion of the tournament.

“The biggest thing they’re trying to get out of the tournament is prove to selectors that they’re worthy of State selection,” Prout said.

“Whilst it is fiercely contested in the spirit of rugby league, it’s also a chance for people to get together and have a good time.” 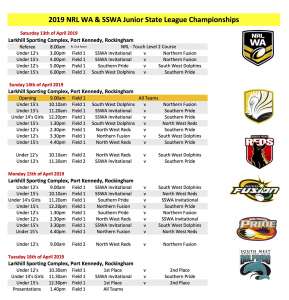